Amalia Hernández (Mexico City, 1917-2000) was the creator, director and choreographer of the Folkloric Ballet of Mexico. It all started in 1952 when she created a small ensemble that merged Mexican folklore with the rigor of ballet and modern dance, with which she performed every week in the television program Función de Gala.

The Folkloric Ballet was so successful that it received an invitation from the Department of Tourism to present its show in other countries as a national promotion instrument. Former president, López Mateos gave them the opportunity to make an apperance at the Palace of Fine Arts theater, where to date they have performed uninterruptedly every Sunday since October 1959. Currently, the ensemble is made up of over 65 dancers and musicians who go on world tours with the mission of reviving Mexican dances, customs and traditions.

The international press considered Amalia Hernández the “Empress of Mexican Treasure of Folklore”, and specialized critics described the Ballet as “a living museum transmitting Mexico’s cultural traditions across the world”.5

In the gardens and homes designed by me, I have always endeavored to allow for the interior placid murmur of silence, and in my fountains, silence sings.6Luis Barragán, acceptance speech during the Pritzker Prize award ceremony, 1980

Luis Barragán (Guadalajara, 1902-Mexico City, 1988) is acknowledged as one of the most important architects of the 20th century. In 1980 he became the first Latin American, and to date the only Mexican, to receive the Pritzker Architecture Prize, for which his work began to be renowned internationally. Since then, architects and art connoisseurs from around the world travel on a pilgrimage to Mexico to study his colors, light management and ability to evoke atmospheres.

The Torres de Satélite —created in collaboration with Mathias Goeritz and Jesús Reyes Ferreira—, the Chapel of the Capuchinas Sacramentarias and the Luis Barragán’s House, are just a sample of his legacy, inscribed in that of a group of artists who gave Mexico its identity.

The Luis Barragán’s House and Workshop, built in 1948, was inscribed as a UNESCO World Heritage Site in 2004. It is the only individual property in Latin America that has been bestowed such honor.

Black clay —also known as black ceramic— is a pottery style, iconic of Oaxaca. Its origins go back to the archaeological remains of domestic crockery made by Zapotec and Mixtec peoples of the Central Valleys.

Until the first decades of the 20th century, craftsmen of the village of San Bartolo Coyotepec made various rustic utensils of matte and grayish clay for daily use: jugs, amphoras, owl figures used as mezcal bottles, apaxtle bowls to store water, flutes, whistles and toys, among others.

In 1950, Mrs. Rosa Real Mateo de Nieto, successor of the pottery artisans, experimented in her workshop until she discovered that the color and brightness of the pieces could be changed by polishing and cooking them at a slightly lower temperature. Thus black clay was created, the most popular pottery among Mexican crafts collectors.

This Mexican architect, winner of the 2014 Global Award for Sustainable Architecture, was born in Mexico City in 1972 and studied architecture at the Universidad Iberoamericana.

Her work, regarded by experts as versatile, innovative, transdisciplinary and global, has crossed borders with projects in Europe, Asia and America, and has earned her important awards such as the Berliner Kunstpreis (2012), the Global Award for Sustainable Architecture (2014), the Architizer Impact Award (2017), and the Design Vanguard —as considered one of the 10 best young architects in the world in 2007—, among many others.

The projects created in the Tatiana Bilbao Studio aspire to “understand architecture from a multicultural and multidisciplinary view to create humanized spaces that react to global capitalism”.7

Some of her works in Mexico include the Botanical Garden and the Biotechnological Park Building of the Monterrey Institute of Technology in Culiacán, Sinaloa, and the Chapel of Gratitude for the Pilgrimage Route in Jalisco.

Viva Mexico! Paris is magnificent but Mexico is so great!

Luis Buñuel, in a letter to Gabriel Figueroa

Luis Buñuel (Calanda, Spain, 1900-Mexico City, 1983) had his first encounter with surrealism in Paris, where he served as a critic, poet and filmmaker. There he filmed, in collaboration with Salvador Dalí, the film that would become the most important reference of surrealist cinema: An Andalusian Dog (1929).

The Spanish civil war and chance brought him to Mexico in 1936, where he reached the brightest moment of his career.

The Young and the Damned (1950) was his first masterpiece filmed in this country. In 1951 it premiered at the Cannes Film Festival, overshadowed by an aura of criticism stemmed from focusing on Mexico City’s slums, while ignoring the portrait that the director and the cinematographer Gabriel Figueroa tried to achieve. Almost seven decades later, in 2019, The Young and the Damned was re-released with ovations in Cannes as a sample of its aesthetic value and its validity.

A burrito is technically a taco: a wrap made with a large flour tortilla with different types of fillings, traditionally prepared with meat, as well as beans, potatoes, cheese and other ingredients.

It is so popular in the United States that Tex-Mex food has claimed its invention for years, but burrito is an invention from the Mexican side of the border. Although there are several legends about its creation they all agree on one point: burritos were invented in Ciudad Juárez, Mexico.

The most widespread story tells that at the end of the 19th century —and even until the revolutionary era— there was a man named Juan Méndez, who sold food in rolled flour tortillas. He was so successful that every day he went back and forth from the Bella Vista neighborhood in Ciudad Juárez to El Paso, Texas, loading his merchandise onto a donkey —burro—, which would eventually inspire the name.

José Hermenegildo de la Luz Bustos Hernández (1832-1907) was born in Purísima del Rincón, a small village in the state of Guanajuato, which he bearly left. He began to paint at a very early age and, unlike many artists of his time, he had no artistic training, so his self-taught search distanced him from the canon established at a time when painting was academic and copied European models.

He lived humbly and, although his origin was mixed race, he was always proud of his indigenous roots. He used to say, “I am indigenous and proud of it”. In addition to selling his drawings and portraits, he earned his living working as a healer, tinsmith, carpenter, master builder, bricklayer and ice cream seller.

The body of his work consists of more than four hundred paintings, mostly portraits, religious scenes and still life that are characterized by the precision and richness of their details. His legacy tended towards popular arts and was a great influence for artists like José Guadalupe Posada and many others who came later. 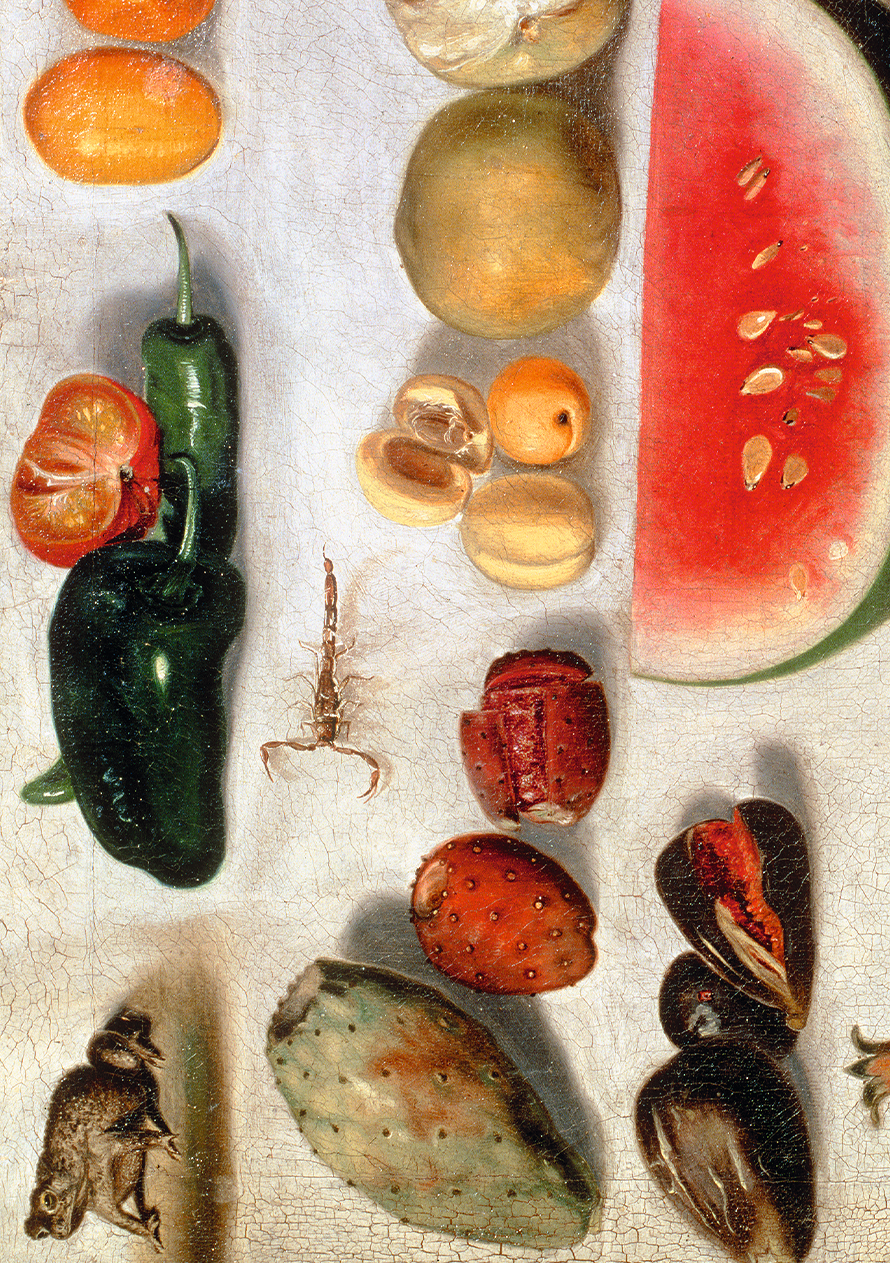